What Consumer Debt Means for the State of the U.S. Economy

In order to have industry expertise, one must also have solid knowledge on the cyclicality of the nation’s economy. The state of the economy starts and stops with the consumer. For example, in 2017, consumer spending represented 68 percent of GDP. When the consumer stops spending, businesses suffer, and the slowdown filters on down from there.

A chart from our partner, Local Market Monitor, caught my eye this week. It shows the inflation-adjusted increase in consumer debt (excluding mortgages) from 1970 to the present. The chart reveals that in 1970, the average American’s personal debt was around $4,000. That was approximately 20 percent of the average income.

Since then, that number has steadily increased to today’s number of around $12,000 per person…a threefold increase in less than 50 years. That's equal to 40 percent of the average American’s income, and comes mainly in the form of credit card debit and student loans. Today, student debt stands at about $1.5 trillion, and Americans owe more than a trillion dollars on credit cards.

You’ll notice in this chart, each upward blue trend line representing consumer debt runs into a wall: The gold vertical bars are recessions. When these recessions hit, reality also sets in for consumers who are living on borrowed money, and there is typically a subsequent dip in the per capita amount of consumer debt. 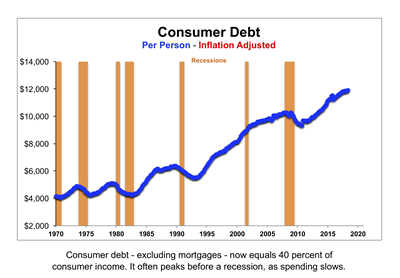 But Winzer’s research is valuable beyond simply predicting home values. His analyses can help determine investment risk in different geographic areas and can also help predict trends within the broader economy. That’s why this chart on consumer debt is both interesting… and concerning.

In his latest “National Economic Outlook” newsletter, overtly says that he believes this increase in consumer debt will cause the next recession in this country. “It won't trigger it, that will be some unrelated event, but all of a sudden, people will realize they can't spend any more money.”

A shift in the banking business model

Winzer goes on to explain what he believes to be the origin of this economic downturn in the making. It used to be that banks made a majority of their profits from business clients, but now, they make most of their money from consumers, so they are incentivized to encourage consumer customers to borrow more and more money.

“With no natural brake on the system,” Winzer says, “where will it end? When debt is 50 percent of income, 80 percent? Or maybe it will never end and we'll have a larger portion of the population spending less and less, while an ever-smaller, wealthier one spends more and more. That would be a social and political disaster.”

The “National Economic Outlook” newsletter goes on to analyze the year-over-year jobs data, which is up 1.7 percent over last year. Business services are up 2.6 percent, making that sector the main driver for the economy right now. Manufacturing and healthcare are both up 2 percent, and restaurants are up 1.6 percent. The retail sector has been hard-hit in the past year, though they did edge slightly higher, and government job growth was flat.

But the newsletter also calls attention to the construction sector, where jobs were up 4 percent. “This may seem like a big deal, but it's not,” Winzer says. “After a decade of empty homes and fewer people who can afford to buy—and despite the new boom in California—the construction industry is still smaller than it was 10 years ago.”

Recession on the horizon?

So, as you can so, as Winzer’s analysis suggests, while jobs are up slightly in several industries, consumer debt continues to grow too, which may contribute to an economic downturn or even a recession. Banks must be cognizant of their role in these swelling levels of consumer debt.